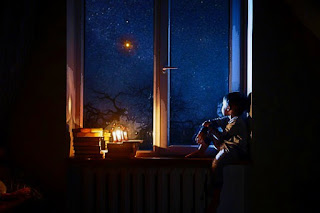 When I was a child I used to sometimes dream of a wandering star.  A mysterious ancient flame that moved across the night sky.  It was a glow that seemed a part of me somehow, connected to the half-recognised grief of a lost homeland.  A shattered, once-enchanted realm.  I couldn't explain this grief to the grown-ups around me or the other children.  I couldn't even adequately put it into words.  The feelings, the visions and premonitions.  Endless shifting between worlds.  It can be so lonely and terrifying; seeing things that other people can't see.  Knowing things that other people don't know.  A young boy desperate for understanding, told that he was either a liar, mad or cursed.  After a while you start believing those fears, especially in your darkest and loneliest moments.  Perhaps that's why I dreamt so often of my wandering star.  I called this star my friend.  Sometimes I imagined it was an angel and that when I slept she would come down from the night to visit my window.  Watching over me, singing to me, soothing my agonies.  A strange floating light.  It was only recently that I came to understand the true meaning of that night-star.  That ancient flame drifting through the black.  As a boy I wanted to believe it was healing my losses and tending my grief whilst I slept.   But as I got older I stopped dreaming of that wandering star.  I began to think I was a fool.  There were no angels, no floating lights, nor sweet music at my window as I slept.  Only suffering, shadows and wraiths.  But I was wrong.  I realize that now.  The floating light was so much more than a simple childhood fantasy.  The heart of the boy I used to be had been right all along.  That friend in the sky was an integral part of my future hope and healing.  An angel like a lantern at my window.  Singing to me of faith, heaven and home.

A Floating Light from Raj Sisodia on Vimeo.