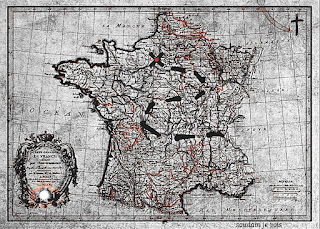 I have spent more than a decade readying the river.  These lonely years preparing the tree.  I've shared moments with you.  Synergy and secrets of that realm before the fracture.  Before the terrifying hush.  Cities burning. Chronologies aflame.  Space and time.  Sharing now in the shattered tongues that remain.  In broken Sanskrit, Hebrew, and Greek.  The Latin of the romances, or what's left of them.  Oh, how mankind is fascinated by those tales of the lost regal.  The fallen first family.  Retold through various cultures and stories.  Legend, reimagined over and over again.
Refractions of starlight in waters of the dreaming Earth.
The highest; lost low and anonymous.  But you bind such shining legend in mortal veil.  And yet there is truth in those fictions.  More than you recognise.  Echoes of the old chronology. Radiant even now, though submerged.  The way mortal myth and history courts the old refrains. Like a music box.  Carrying pieces of the dream into waking life.  Creating confections of what was lost.
These stories of angels and halflings that you love so well.  They are truer than you've ever known, or realized.  Tales of faery, bound now to human grasp.  To riverflesh and uncut rock. The girl child, stolen, banished or fled.  Through fireplace and secret passage, down into the humility of ordinary mortal life.  Towers and streets and fields.  The Sarai, lost but still living beneath the gate of a thousand stars.  These tales are fragments and echoes of the shining realm.  The radiant dreaming that was life before the Fall.  Palaces of Viir, Sol and Eth’iri.  Secrets within secrets within secrets.
Anastasis, the occulted ones called her.
Child of the Resurrection.
In Diana.  In the place and the name of my mother.  Najaret, Nava'tri, Napoli.  And other dreams.
But even those occulted ones know only pieces of the whole.  Those nights of fire.  Usurpation.  So-called revolution.  The genocide of both angel and mortal.  When I was given no choice but to take control of those first fallen hours.  Even as they settled like a mockery of snow.  When I swore my kin would somehow find an undisturbed rest, far away from those ashes of our homelands.  Fortunate, and loved.  Beyond the hideous sorcery of wraiths.  Weeping as I scattered the stars of my family like a forgotten song.  Until the fabled time of glories would one day come again.  Crowns of light restored to my beloved ones.  Yet still so many acolytes dare to claim Roma's name in this darkened dreaming.  Through cities, flesh and false legacies.  Our nova of a thousand embers, like fireflies in a night sky.  Like I promised you.  These are not the truths of history, but the echoes of angels within that history.  They are fairytales and lullabies.  Truer than the death of any star.  Where else would I hide you, sweet ones, if not closest to the heart?  My loves, I pray that one day you understand the breadth of it.  The things I had to do to keep you safe.  All of you.  Place of the Crossing.  Truth of the twinning river.  Temesh.  No one without the other, and no other without the one.  This mystery.  This tree of living signs.  Like a key to a music box.  I can't finish the song without you.  So, tell me.  Can you imagine?  Is it possible to hear this with me now?  Will you allow yourself to dance again?