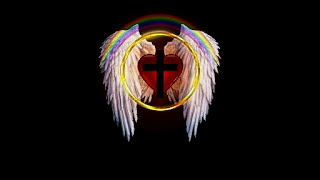 Nis'atur, it's hard enough to recall the truth between these bleeding shoulders. Seeping images torn from dream and vine.  Wondering if any love was mine to begin.  Those shades in the looking-glass.  Those faraway cautions.  The breadth between their isolation and my naïve intention.  Thinking I could somehow keep them all at bay.  That I could keep a kingdom suspended in the honeyed light of evening.  Truth, and fair.  And I did, for a time before hours. The gulf between every kissing skin, and wing.  Bleached now for passing and privilege.  Those losses between brothers, kings and counterparts.  But for a shining, golden moment there was no such loss.  Yasha'lem, Navah'tri, Camri'lach.  That fabled realm where mortal kith never hungered, nor wanted for warmth or coin.  Sovereign, all.  Not a single soul abandoned, or poor, or deemed lesser.
But we were lost in the collapse.
Made slaves, and slavers.  Those cautions growing closer, those tragedies of fading gold.  As all the scrying mirrors of the realm began to bleed.  An endless dusk coming upon the lands. Those new ways of suspicion, covet, and violence.  The ritual slaughter of our mutual affections.  Lamentation of the Councils.  Weeping of All Songs.  And then, when we thought we could bear no more of that dusk, an endless night began.  Circles of silence and salt.  Nis'atur, I was not the only broken regent amid the Veils of Myriad.  M'ithriin tongue was darkened at the heed of those wraith-cults.  High among those cults was one who pretended my sister.  Kiskuh, the demoness.  Self-styled revolutionary.  Presenting herself as an old one.  An angel of light.  Instead merely another harbinger of genocide and sickened augury. Commanding our path-workers be gutted and burned like lost mirrors.  And you wonder why I fashioned those islands?  You wonder why I rage now, and tempest?  From king to slave in less than a thousand years.  It’s no mean feat to shatter the viceroy.  I would commend your determination, Fallen, if it wasn't so vile.
But it is, and you are.
Hideous, vampiric, unspeakable.
You bend backwards my brethren, breaking both spirit and mind as they fail to fathom how kisses became gulfs, and passion violence.  Skin scarring skin, of every shade.  Brother against brother against sister.  Y'ava's waters, strange and apple-scented.  Lost now.  Camri's halls forgotten, like the broken steps of Winchester's knave.  Or the sour, tainted bread of Londinium's most disturbing mills.  And yet, a people remain.  Not without lore, or heart.  Many among still believing in higher truths.  Powers greater than themselves, and far greater than their oppressors.
I've seen many a sickened rose upon my table, as Blake did. Counterfeit lineages. False kings. K'athari Kara, they claim in veiled tongues. Om Nis'aturi.  From seed beneath the river, they pretend.  From bloom upon the tree.  But I remember the taste and torment of a true rose, as both kiss and kinship.  Oh, Fallen.  You think the sangreal is a prize of power.  A cloak of legitimacy.  A way to bury my Father's truths and enshrine these false chronologies in their stead.  But John is not quite the fool you think he is.
Mercy, Grace, and Salvation.
You think I belong in a churchyard, don't you?  Some ancient, weathered statue.  Featureless, unrecognizable.  A vaguely humanoid stone lost among the ivy.  A private joke, hidden in plain sight.  Well, maybe so.  But I'm far more than a blade in an anvil.  More than poetry or prose.  I am the hilt and hand of Albion's true regent.  Beyond violence, fallen figments, or the theft of All Signs.  My tree is the first tree.  My name is the key to every House.
As you well know, Fallen.
I’ve read those illuminated manuscripts fashioned by the hands of the occulted ones.  Chevalier.  Those scribes, lovers and tricksters.  Named in the language of the birds.  As am I.  What text is this, if not hidden and shining?  What name is Ka'shayel, if not the name of flight itself?  Love shall conquer, in the end.  Heed this.  I speak these words not for posterity but for the hope of every yearning soul.  The arc of every augury, beyond death.  Those many legends of the sleeping sun.  Sword through stone.  Cross upon hill.  Place of the skull.  Nis'atur, it's hard enough between these weeping eyes.  Tears of dreaming, and vine.  Like the vintage of any king worth his salt.