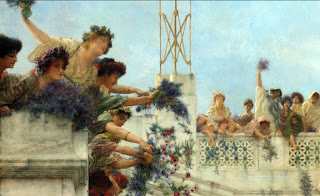 I have conversed with the spiritual sun.  I saw him on Primrose Hill.  As Blake did.  The subtle sublime.  Quiet, hidden, immense.  The light behind the light.  Barefoot at the door, I hear it.  And I’m lead to the way.  Ruins of the Priory. The groves of St John.  As it was in the courtyard at the place where Powles Crosse once stood.  Like the quartered sun of the old Celts.  Little Golgotha, the Christian elders called it.  An allegory of stone, whereby common folk decided the fate of future kings.  Once, upon that time.  Before the burnings and the hush, and these lies of succession.  Back when the people still spoke of miracles and magic.  It was something more than allegory, they said.  A boy in the courtyard. And a sword, perhaps a thousand years old, hidden within the stone shaft of the old crosse.  Torn from its foundation in the earth; the outer casing crumbling to reveal a blade.  Still sharp and gleaming like a tongue of silver flame.  A dragon's blade, to the old Celts.  The boy was only a figment, some said.  Or in several places at once.  A ghost of each Age, wandering beyond the veils of time and art.  Dreaming beneath the landscape of Albion.  Others claimed him as flesh, of the moment.  A medieval prince hidden from sight as a child, expunged from the records for fear of his emancipatory future.  An augur that would one day dare to question the terrifying supremacies of Rome, Constantinople and Isfahan.  The wraith-priests of every faith who were leading innocents to slaughter.  Distort and damnation.  The darkest magic, spreading like a sickness across the lands.  Bleeding mirrors.  The icons of crosses, crescents and stars, all hungry for blood.  But he was called the people's prince by those who believed, by those who claimed to have seen him with their own eyes.  The boy was blessed by the winds themselves, they said.  Crowned by the painted blaze of dawn.  Light of Eth'iir, still wandering the veils of the threshold.  Places and Ages.  But these stories are nothing more than medieval confections, our learned scholars now claim.  Chivalric romances, they say.  French fancies.  But I tell you now, Fallen.  I have conversed with the spiritual sun.  He is at every high place.  Each sacred hill.  And he dwells also among the low-born.  The poor, the common.  There is nothing elitist or exclusive about that subtle light.  Kasi has seen only glimpses since the Fall, but so much more than he deserved.  I speak as the myriad elders spoke.  Keepers of the oldest wisdom traditions.  Emet, Mi’raj, Omkara.  Those true learned souls who knew fluently the tongues of their brothers and sisters in distant lands.  Those who conversed with the spiritual sun at the source of each faith and each culture.  It matters little of such emblems if we cannot find a place at the table for strangers.  I speak of peace, but a sword.  Like that boy in the courtyard.  Do you hear me, wraiths?  Do you have any real grasp of sacrifice?  I know exactly who I am.  I'm not a god, or a king, or a prince.  And neither are any of you.  I'm not even an angel since those rebels and the war.  Truth be told Kasi is a ghost at the table, but I shall prepare a feast for you.  As I have always tried to do.  As my brother commands.  Do you know who my brother is?  The famished shall eat first of this feast.  Bread, wine and fish.  The neglected shall be fed, the lonely held.  None are abandoned in the light of that spiritual sun.  Tell me, do you even remember why those laurels were first placed?  It was not for the victory of violent conquest.  I still recall the wholesome joys of Floralia.  The kiss of a guiding muse.  The smile of a friend.  New life blooming on the banks of the river.  Are you lost, Roma?  Byzantium? Isfahan?  Perhaps you are thirsty.  Perhaps you've lost your way.  I would happily sup with you, if you lay down your arms.  And your ignorance.  We have water here, from the rose.  By the light of a painted sun.