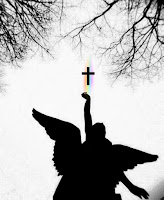 I saw an angel once.  Like an answer to a thousand prayers.  But not aflame in a Lambeth tree as Blake saw.  No, I glimpsed this angel on one of the worst days of my life.  I was surrounded by a circle of wraiths.  Darkness and filth.  They were ravenous.  They had made a living sacrificial altar of me.  An inverted sun like a wound in the firmament.  I bled profusely.  Spiritually, psychically.  At the mercy of their whispering laughter.  The hideous laughter of things that had lost all connection to Light.  The innermost that should guide each sentient being was gone.  Not a glimmer of it remained within them.  These wraiths.  These vile, sorcerous cowards.  But behind them the angel stood, half-hidden in shadow. They didn't even know it was there.  It had cloaked itself from them, but not entirely from me.  It knew I could see things and it wanted me to sense its presence.  The scent of flowers and freshwater.  The sweetness of honeysuckle, a touch of lilac.  Then the familiar, calming drift of my beloved roses.  Those wraiths wanted me broken, you see.  Defiled.  They thought the imagined altar of my flesh was theirs alone.  A ring of ruptured psyche, conjured and held in place by their malefic intent.  But the angel was there too.  Hidden just beyond the circle.  It turned, and looked right at me.  I had never felt anything so beautiful.  Warmth, peace and vitality began flowing through me.  A healing energy.  The angel slowly raised its right hand, palm open in sweet regard.  And I was granted the mercy I had long prayed for.  Though half-hidden, I saw its incredible wings unfurl.  Each feather forged of image, poem and song; some of my own among them.  Utterly humbled, I simply gazed at those dreamed promises of ascension unfolded at its back.  Then, like a pulse that shook perception itself, the angel took flight and was gone.  The wraiths were cast out in that very instant.  The ring of filth broken.  I just lay there in stunned silence, the night spread all about me.  I could still smell the faint scent of roses in the air.  I could feel the angel's healing touch restoring both my mind and my flesh. I laughed in awe, at the explicit wonder of it.  Despite my abilities I had never been visited quite so directly before by a thing of winged dreaming.  Sometimes I still wonder if those malevolent wraiths intended to kill me that night.  To finally finish what they began so long ago.  Never had they gathered in such numbers or with such sinister gravity.  Perhaps I wouldn't be here right now if not for that quiet look and raised palm, that lingering scent of freshwater and flowers.  I thank you, friend.  With all my heart.  For the intervention, your protection, and the gracious gift that is kindled within me still.  I believe this gift isn’t mine alone.  It is to be shared, through image, poem and song.  For those gentle souls who find themselves tormented by these sorcerous wraiths, as I was.  The broken and almost broken, currently shipwrecked at the edge of everything.  Hear me.  You’re not alone in the dark with those things, I swear it.  You might not possess the inner vision of a seer, but I promise you the Bright Ones are very real.  And incredibly powerful.  Thoughtful guardians of such nuance and empathy.  They are in the darkness with you, my friends.  Just beyond the sight of your demons. These angels are lighting your way, gifting you with the strength to keep going. The strength to learn, laugh, and perhaps fall in love.  Each moment of inspiration, every courageous act – they stand with all of us, often unnoticed. Hands raised, palms open in devotion and sweet regard.  Did you know?