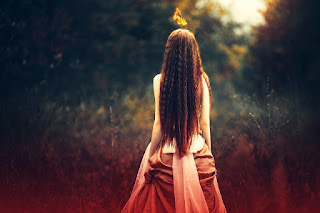 In the garden of well waters, I stand.  At the ever-flowing spring.  Guided, strengthened.  From those subtle places.  Prompted to know the truth even whilst lost.  Seeking amidst every confusion.  It is only this: a hand upon the heart.  For when a voice is hidden within a voice, and an eye within an eye – then a kingdom is found in the mists.  There is a hidden river, a living path, known only to the woman in man.  The wife of his husband's wife.  Prince of her maiden's apostolic theurgy.  Beyond covenant, convent or coronation.  This is more than Mass.  More than bread, or wine.  Isn't it?  Daughters cradle those mothers who birth the sons, who thus nurture fathers like seeds in their breast.  For there is nothing buried that shall not be raised.  These song-lines are folded in ambient and stone.  Turrets of living spring, unseen.  Freshwater and flowers.  Because sometimes it's not enough to be touched by an angel, blessing though it is.  Truly, we all cry out for the embrace of our beloved in the end.  Don’t we?  Whether met, known or merely dreamt.  Faint or flesh.  Mourning, at dawn.  I've felt those agonies too.  Such tempest upon this Marian sea.  This rage is only the ghost of the depths of my love.  An ocean of behest.  I hope you know that, my friends.  Kashi hasn't forgotten his brother's kiss or command.  Neither have you.  Not truly, which is why we’re all here.  Perhaps.  To know again, in the old ways.  As it was in those shining temples of the first dreaming.  In those chronicles of the rose.  The mehndi on my palms, the hooded crimson shawl.  These dark alabaster hands.  Hebrew, Sanskrit, Greek.  Not mere letters, but light.  Hallows of the hidden.  The sacred teachings of the innermost passing unrecognised before the profane.  Teachings of union, multiplicity and recognition.  Hear me.  All true kings are crowned only by a beggar's grace.  Pleading in every tongue.  To be heard, seen, and attended.  Thus, let a voice be with a voice and an eye with an eye.  Lest these wraiths burn everything and place horrors and falsity at the feet of our name.  But we are not without humour, are we?  Or élan.  Temesh, of the healing waters.  Where the fishers dwell.  It flows like a thousand stars through these secret books of the vessel.  Yet far more than vessel.  A many-splendored mirror.  A chalice of the leading way.  An ever-flowing spring.  To drink from this lamp of the heart is not to obtain an unconquerable power, it is to begin a truly meaningful life of incomparable study.  My love taught me that.  So tell me, Kathari, whom does the grail serve?