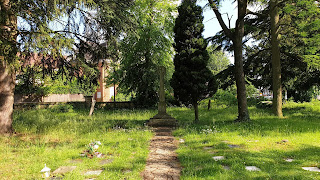 Once, in time immemorial, the place of my childhood was a vast forest of oak.  I was raised at a high place.  One of the highest places in London.  Along the ridge of what was once the Great North Wood.  A place the locals still sometimes call Beggar's Hill.  You can see for miles from this high place.  Towards the steel and glass towers of Central London to the stunning green slopes of the North Downs.  Alas, most of the legendary forest is gone now.  Felled long before I was born; sacrificed by nobles as raw materials offered to the ever-swelling presence of medieval London.  It used to make me sad as a child, that knowledge.  That my home on the hill was once a mysterious ancient landscape of oak trees that scaled the entirety of the Norwood Ridge.  As a boy nothing stirred my imagination more than forests and high places.  Knowledge of the loss of that landscape felt palpable sometimes.  It still does.  But there were fragments that survived all along the uplands of the clay ridge even as the sprawling forests were tamed by Man, becoming coppice and wood pasture.  Wild fragments. Streatham Common Woodland, Biggin Wood, Spa Wood, the majestic tangle of Beaulieu Heights.  It was here I went wandering recently with my beloved, on a beautiful spring afternoon.  It always feels strange returning home, but this felt different somehow.  I wanted to show her my high place.  My formative years.  I wanted to share a little more of myself than I had before.  It gets lonely at the edge sometimes, doesn't it?  No matter how bravely we love. We held hands as we wandered this remnant of the North Wood.  In a red dress and with warm eyes she listened as I told her pieces of my past.  We talked and laughed and kissed beneath green canopies.  I still wonder about the Norwood Ridge, the countless oaks that once stood.  There are many place-names here that speak of ravens, evoking an image of the old forest as a vast nesting ground.  Thousands of crows among the branches, before Man ever came to fell the trees and raise the city.  Even my old High School was named for a raven.  Sometimes as a boy I would sense a strange presence upon the hill, something older than the legends of beggars and gypsies and the galleon of Francis Drake.  Something ancient, druidic and supernal.  I often wondered if the unseen spirits of tree-guardians wandered the ridge in lament.  Perhaps they were watching as my lover and I explored the remains of their remit.

Only a stone's throw from the wooded remnant at Beaulieu Heights sits the church of All Saints.  A beautiful building of dark stone that was badly damaged by a bomb during the Blitz.  It is the nearest church to my childhood home and so holds a place of prominent significance for me now.  Again I felt a strangeness as I invited my girlfriend on a whim to wander with me through the gravestones of its churchyard.  The afternoon was warm and bright and the grass seemed lit with an even greener vitality.  Life and death, I thought.  Side by side, as one.  Robert Fitzroy, famous Vice-Admiral of the Royal Navy, is interred among the stones of All Saints.  We stood at his grave and read aloud a verse from Ecclesiastes etched into the headstone:

"The wind goeth toward the south, and turneth about unto the north; it whirleth about continually, and the wind returneth again according to his circuits."

It’s then that I notice something standing out among all the other gravestones.  What I assume at first is an obelisk.  Once we get closer I realise that in fact a tall stone cross is standing in the open churchyard.  A Celtic cross, like the ancient quartered sun.  For a moment I'm taken aback.  Breathless, uncertain.  I don't want to alarm my girlfriend, but I sense how much this could potentially mean to me.  I feel a frisson of deep strangeness in the air.  Like spirits have gathered and the oaks are all around.  There is a narrow paved pathway leading to the weathered monument.  My girlfriend notices a name on one of the memorials placed at the invitation to the path, and reads it out to me.  Donald Rose.  I smile, trying to laugh the name away, but I know this is a powerful sign.  I can feel it.  Her eyes tell me that maybe she can feel it too.  At the end of the pathway I finally grasp why I sensed such strangeness in the air.  The Celtic stone cross is perhaps eleven feet high.  It seems one of the oldest things in the churchyard; a central feature of the original design from the 1820s.  There are no inscriptions or names etched into the base.  If any were there before, all trace of them have long since weathered away.  To my astonishment, along the central shaft of the stone cross a mighty broadsword is carved.  Its cross-guard is aligned to the quartered ring and its blade runs the length of the monument toward its base.  I gaze in speechless wonder at the sight of this carved sword.  Here, on this literal path of a rose.  I have no conscious memory of ever having seen this thing as a child, or even setting foot within the churchyard of All Saints.  To my mind I had only passed by the church on my way to greater adventures, occasionally glancing up at the church tower in vague appreciation.  My childhood was filled with books, fields and remnants of woodland, not gravestones and churchyards.  But gazing then I wondered.  Was it possible?  Had I seen this glorious sword once before and cast it completely from my mind?  My girlfriend noticed my awe but not quite how shaken I was by the discovery.  I explained some things, as best I could.  I told her of pathways, poetry and spirits among the trees.  Kings and coronations.  I touch the carved blade in an attempt to draw some of its essence into my psyche.  It's then that I was overcome with the feeling that the quartered cross was only a leitmotif to some greater, older secret. As though the Great North Wood wasn't gone at all, but remains somehow.  Through some act of druidic sorcery.  Ancient folk music hidden within the stone.

Having discovered a sword in this haunted wood of my imagining, I knew the way was open.  A leading way that would carry my beloved and I along the ridge and down past my childhood home.  The area is a quiet Victorian suburb filled with grand houses once owned by wealthy families in the nineteenth century.  Our home was a modest affair in comparison, yet I never felt out of place as a boy.  Never a pretender or interloper.  I felt like I belonged there among the ghost-forests of the high place; a witness to things other people couldn’t see or hear.  As I walked beside my girlfriend I knew exactly what was needed to complete this particular path-work. We found our way to the recreation grounds where I used to play as a boy.  Grounds that were sung to Oriana when first opened.  All Creatures Now.  Echoes of ancient folk songs latterly dressed in madrigal garb.  At the edge of those fields is Rockmount Primary School, where I first learned to read.  Where I discovered my love of the written word.  The Ingram boy had returned home at last, it seemed.  Like a raven among his own.  There at the edge of my green and pleasant land stood the old drinking fountain.  The thing that so fascinated me as a child.  I had seen far grander fountains as a boy, but this particular one seemed a curiosity and drew me repeatedly.  A little monument of polished granite that was broken and dry long before I found it.  Quiet, lonely and regal.  I still remember an old photo my mother had once taken of me sitting atop the fountain like a living statue.  The fountain felt ancient even in my childhood.  But it was still adorned with the silver plaque dated 1891.  And a strange keyhole in the plaque's centre – a keyhole that as a child I was convinced would open to reveal some glorious mystical mechanism.  If only I possessed the key.  I was sure an active portal or gate of some kind was concealed within, that the monument was only pretending to be a drinking fountain in order to hide itself from unworthy eyes.  But I had sensed its secret power, having trained my sight enough to be deemed worthy.  My beloved smiled at me as I recounted the stories, warmed by my childish wonder and delight.  There was such love in her expression.  Like living water itself, as pure and true as the natural springs that once surfaced amid the oaks along the Norwood Ridge.  It felt so right, I thought to myself.  Being returned home like this, to the high place and ghost-forests of my youth.  Stone swords and imagined kings.  These enchanted lands had shaped me.  These were the places that first taught me how to listen and see.  The fountain's strange gravity always perplexed me as a child, as did my curious love of it.  But, happily, it makes rather more sense to me now.