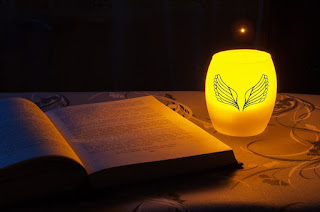 Sometimes I still wonder who I really am at the core, even after all these years of intensive soul-searching.  I'm older now, but in one way or another I've been seeking the truth since I was ten years old.  I've spoken here before of my childhood dreams of a strange ghostlike star.  A star that I wanted to believe was also an angel.  Even at such a young age I wanted to understand the mysteries of life, ourselves, and our connection to each other.  This wasn't and isn't some facile indulgence.  It meant everything to me.  It still does.  I remember feeling so distant from the other kids when I was growing up.  A head full of visions, dreams and nightmares.  I remember how tired and old I felt even in my early teens.  I knew it was an odd feeling, and yet it wasn't new.  An unnerving Deja-vu seemed infused into everything.  I guess that's the eerie result of sometimes knowing things before they happen.  Life feels alien yet hauntingly familiar.  I felt more at home among poems, memories and ghosts than real people.  That strangeness hasn't gone away.  I live with it daily.

That's why these artist’s pages matter so much, I suppose.  Where else can I share the full complexity of those beautiful and sometimes terrifying experiences?  The people in my personal life have wonderful souls but they are only ready for mere glimpses of the unseen world.  I carry most of this knowledge alone for the simple reason that I don't want to frighten or burden the people I love the most.  It's a difficult path to walk, being sighted in this way.  I often use this ability to create various forms of magic.  To delight or intrigue, to spread joy and appreciation.  But there's a shadow side to all that wonder.  The world is filled with both light and dark.  The divine expanse of our imaginations contain both angels and demons, devas and asuras.  I'm all too happy to share the light, but the darkness I face alone.  It can be such a crushing weight to carry.  But then, that's the case for so many of us, isn't it?  Psychic or otherwise.  We all have trauma and struggles that we can barely articulate.  It's a difficult thing sometimes to receive love, or accept help, especially when we feel wounded.  A tragic irony; that in these times we often feel too brittle, too exhausted, and a helping hand can be confused for pity.  Nobody wants to feel weak or incapable.  We’re all trying to chart a course, no matter the odds against us.

I think that's why I was so fascinated by the idea of stars as a child.  I was intrigued by the old explorers who mapped their voyages by following those glinting diamonds in the dark.  Ghost-lights, I called them.  Lanterns for the lost.  Tiny points of brilliance in the night sky that were actually something far, far grander.  The ghosts of midnight suns.  Perpetual flames that once burned with unimaginable ferocity, enough to warp the fabric of reality itself.  Enough to bend the boundaries of both time and space.  I knew that I would become a ghost one day, like the sun.  And so I’d ask myself, "What really matters to me when space and time don't work like they're supposed to?  What do I truly want to live for in a world where magic is real?  What might I be willing to actually die for?"  Getting older hasn't changed the answers to those questions.  I have more scars now, more experience, but my moral compass is still the same one I treasured as a boy.  A winged compass that keeps my eyes skyward.  I'm still using the stars to guide me.  Still making use of those lanterns when I'm lost.  For me it's about completing a warrior's work.  It's about making a commitment to God, to the higher powers, to creativity itself.  Even as a boy I wanted to use my gifts to help people, no matter the cost.  I knew all too well of the unseen.  I understood that divinity was real, but what good was that knowledge if it was mine alone?  And so I wanted to serve my Father in the only way I knew how.  Through creating art.

Religion, spirituality, gnosis – call it what you want.  It was always a very real and important dimension to my life.  I saw things that other people couldn't see.  I knew things that other people didn't know.  This placed a very particular kind of responsibility upon me.  Whether I liked it or not.  Believe me, I often hated it with a passion.  I cursed the heavens and the earth, but it never stopped me from wanting to help.  These artist’s pages are where I feel most at home.  This free-verse angelic script; it's the journal of a spirit forever trapped in the demimonde.  For the rest of my life I'll never be able to truly leave this place, but that's ok.  I know I was put here for a reason.  It's incredibly bittersweet, but I have friends – dear and distant souls – who read these pages with genuine care.  In a way these souls know me better than many of the people in my daily life.  These pages allow those souls to be privy to my innermost depths in a way that cannot be conveyed in ordinary terms.  So, of course I feel close to them.  I believe that spirituality isn’t abstract or transcendental.  I believe it’s a living, breathing continuum.  It means so much to have friends who are willing to explore that continuum with me.  Thank you for that.  These distant, ephemeral connections mean more than I can ever say.  I tell you now, without these lanterns I would be lost.  Some of my dearest friends are ghosts – distant stars – but they've already taught me so much.  I hope I've been able to give back something as equally useful.  Something insightful or uplifting.  If a connection is meaningful and honourable doesn’t that make it real in some way?  After all, what's really real to a ghost, or to an angel wreathed in stars?