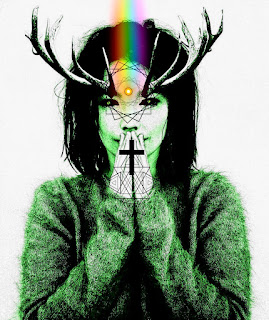 The green place is quiet, and inconceivably ancient.  Once there were trees older than time in this place.  Some of them still stand in the gentle hush, hidden just beyond the veil of dusk.  A veil of mist amidst the gathered elders.  Do you know what the oldest song of the forest is?  The first sounds to disturb the endless quiet?  It isn't the rustle of leaves, the crack of branches or the murmur of distant rivers.  No, the earliest and most ancient music of the woods is the bleating of a frightened fawn.  A young calf, undamaged but fallen.  Alone.  Calling for help in the myriad throat of every living thing.  Stone, mud and root.  A thousand thrones.  A little halfling keening with the cry of a human child.  'She is beautiful and she soothes', the fawn cries.  'Where is she? Isn't she here?'  The trees themselves recall.  Their branches still bend and canopies still gather to protect the sacred child.  A memory of the first colours.  Evensong. The chlorophyll gift nestled in leaves, moss and skin.  Mortals often wonder how this could be; a halfling lost in the place before time where branches hold the eternal sea.  But Man is older than Earth, or star.  Far, far older.  Perennial scribes conjecture and delight in these details.  'What man is the gatekeeper?' they ask.  'Mabon?  M'ithriin?  Names within names as eyes within an eye?'  Perhaps they speak of the prophet.  The sorcerer.  Once-Gaulish prince and forgotten covenant of Albion.  The young, haunted stag.  These antlers upon the prince of gates seem all too familiar, yet strange and indistinct.  But the occulted know well enough, don't we?  Among wraiths, a Brythonic wraith-god.  He whom the first Celts called the shrouded one; the hidden king.  There were dragons beneath the hill in those days, and fawns upon the forest floor.  Cities beneath the mountain and star-maps hidden in every work of art.  These are just some of the secrets of your legends and medieval romances.  Tales of fay and thieves of the sea.  The unsettling truths of our lost golden hour are hidden beneath the texts of each successive rule.  As it was with the acclaimed night-bard of the Dru'ai.  T'alis and his wonders.  Forgive me if I speak somewhat in tongues, but these are the necessities of genuine revolution.  The nature of hunting, and vengeance.  Each culture has its stories, don't they?  They are all so similar, or else the same.  A wild one deep in the woods.  Oracular, insane, touched with demonic poetry.  Or angelic light.  I’m not here to do your thinking for you, but I have alluded to this nocturne before.  You will know me before the day is done, Fallen.  You will know me well.  I promise you that.  By the arch of my mother's bow, I swear it.  I am still here, just beyond the veil of mist, nestled in leaves and moss.  Standing stones and falling stars.  Green and black and haunted with dusk.  For love, and magic.  I tell you now, betrayers.  I am all that you fear.  I am the edge of every dark, churning sea.  My Father is utterly beyond your comprehension, but I am my Mother’s son.  She is the trees, the green place, and more.  She is beautiful, and she soothes.