The Hell for Leather Salvation 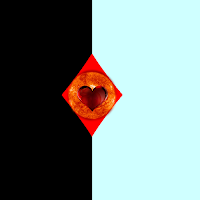 I'm not here just to write beautiful poetry.  I never was.  I'll always seek and express spiritual beauty, of course.  Because I'm not insane.  But I came here for a reason.  A mission and a purpose.  I intend to complete that mission and fulfil that purpose.  Death won't stop me, fallen.  It never does.  Torture won't stop me either.  And fuck, how you tortured me.  The rape, the constant defilement.  Disembowelling my psyche with every sickness you could hope to conjure.  Such wraiths and their avatars have never truly left me alone.  My childhood, such as it was.  The little boy hunting monsters – tired, terrified, resolute.  I've been spiritually abused my whole life, awaking every other morning with scratches and scars that were all too physical.  No human being, man or woman, is truly comfortable discussing the ways in which they were violated.  Especially when faced with such a dark world, in which the notion of healing seems like a distant dream.  When their abusers are still too present, or ugly, or hiding behind stolen power like the cowards they are.  Demons, deviants, rapists and killers.  It's all the same shit, in the end.  Evil – metaphysical or otherwise – is always revealed as utterly banal once the various glamours are removed.  Banal, insipid, stupid.  Where balanced thought would reach for light, manifesting such, these deranged psychopaths reach instead for darkness.  To wilfully seek mental illness whilst styling yourselves as Children of the Abyss is so grotesque and ignorant.  But such is the way with vampires and their human familiars, being thieves and violators by nature.

But I have witches among my brethren also.  There are many kinds of magic, fallen.  So, hear me.  I decide the times and the contexts.  I will be the one to place those secrets within secrets.  Many things are possible in dreaming, after all.  I decide the depths and limits of this dreaming.  Not you.  Never you, callous ones.  I suppose it sounds quaint to you, but the only reason I'm here is because of love.  The only reason I come, and come again.  I'll let you in on a little secret.  I never really leave.  I genuinely care about the voiceless, the weak and wounded.  I actually fight on behalf of those kind souls who are too traumatised to fight for themselves.  Because I'm a fucking rock star, and you're just a sick little bitch.  I can take my time, and still move faster than the mind or eye or glass can see.  I have real power within me, just beneath the skin.  It isn’t stolen.  It’s always been mine.  Soon come, fallen.  I can smell your fear, and you know it.