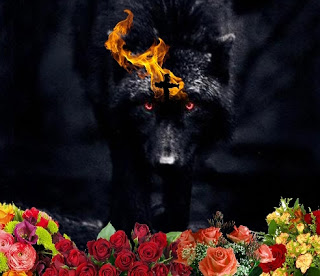 Some of us live in hell, whilst serving heaven.  Some of us dwell in the places below and between.  Often not by choice, but by necessity.  There is work to be done in these places, after all.  Believe me, I would rather I didn't live here.  But I have reasons to be hopeful.  The first glimmers of dawn in this perpetual midnight.  At least I remember it.  There are things here who have lost all names for light.  They think it a trick when I describe it to them.  A demonic glamour of sorts.  They sometimes ask me, "Why would such a thing exist here, child?  Among the damned?"
I once told them this isn't really hell, only the imagining of such.
"Pray tell, poet.  What's the difference then?"
I give them no easy answers, no proselytizing.  They would scarcely hear nor heed me even if I did.  It's a difficult thing to tell a sentience.  That we are dreamwalkers all – wandering through the radiance or ruins of our imaginings.  Most holy, or most defiled.  Those sacred and terrifying places where our stories meet each other.  Those mysterious inside-out places that we call space, and time.  Measures, observations.  Fictional tools by which we attempt to grasp our fictions.  But fictions are real, as any true artist will tell you.  Dreams and nightmares are real too.  And so, these many worlds hidden all about us – they are also very real.  The knife, the bullet, the bomb.  Wraith-technologies whereby Man is whispered into chaos.  Made ugly. Tempted into turning his sisters and brothers into meat.  Into slaves.  We of the Innermost do not abide it.
Fallen, do you still suppose the Magi are merely an artistic conceit?  The fever-dreams of an abused and exhausted poet?  You would do well to heed me, I think.
I can still shine.  I may not be the angel I once was, in those times before the seething hush.  But I am far greater than my enemies would hope.
My Vahishta is with me.
Always.
Those songs, those councils.  Those broken roads and souls touched by grace.  A kiss so sweet and so true I took it as my home.  You still don't understand, Callous Ones.  Those golden threads that connected us – they connect us still.  Each moment, each thought and its web of context.  Each imagining and its depths.
Temesh, fallen.
She is Me.  I am She.
We Magi laugh at your tomes and skins of howling.  You know nothing of wolves.  You know nothing of anything, really.  The outer semblance, and those omens you should have heeded.  From nothing, to nobody.  Liquid flesh, at the river's throat.  Where she drowned and rose again.  I was there, in dreams.  I soothed her tears.  I held her till she slept.  Fallen, you claim to be occultists and mercenaries but you’re just fools and cowards.  You don't really understand magic, or war, do you?
Those rags, those feathers.
All mine.
When I spoke of All Songs did you think I was being grandiose?  I walk blind and backwards when I have to, fallen.  I built this gate in the dark, on my knees, with my hands bound behind my back.  Shalem-Yeru.  But that's another story, isn't it?
Husbands, fathers, brothers.
A wolf is among you, wraiths.  A wolf who shines, like the old romances.  Movement in concert.  Harbours of living light.  When poets were keepers of keys, and each garden held our treasures for us.  For the lost and lonely.  For the kind.  Those honourable times.  No mere figment, my love.
I remember, Asha.
And I am with you still, working to restore those blessed gardens.
I've seen our heartlight in the beds of rivers.  In the depths of the sea.  Liquid dawn spreading through the flesh of this dreaming.  Upon the face of All Waters.  Perfections of a different kind.