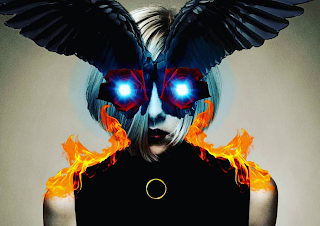 When I was young I talked with ghosts.  But not just ghosts.  Spirits of all kinds, both dark and light.  Often I did not wish to talk with them, but they wished to talk with me.  One of these ghosts told me a story that has stayed with me over the years.
Once, this spirit told me, an archangel spoke to his demon brother upon a darkened road at Gibeon.  His brother was dying.  The archangel plucked a feather from his wing and placed it upon his brother's throat, to restore him.  The demon brother, now a lesser king of Hell, still wears that feather at his throat.  He rages, still.  But occasionally, secretly, he wonders of love.
I told this spirit that I didn't really believe in Heaven, or Hell.  I believed only in the imagination. I can still recall the feel of her patient, chiding smile.  How young I was then.  How arrogant. Inexperienced.  I know better now.  Of the Imagination, and the endlessness of forms and shades and agencies that dwell therein.
I still wonder about that story.  It was not simply a myth, you see.  Not simply a fairytale. This spirit spoke as though she had first-hand knowledge of the story.  I could feel her very personal connection to the account, and it frightened me.  Because it suggested to me that all things truly were possible.  How, I wondered, were they brothers?  What bound them?  What history did they share?  I still speculate on the nature of their relationship.  In this eternity of dreams will his brother's feather at his throat one day lift the demon king towards a light beyond imagining?  If he secretly wonders of love, what does he wonder?  He rages still, but does he soften?  Does he sweeten?  Are such things truly possible, even in the abyss?
I have seen dark things find their way to the light before, but never a demon king.  I have heard murmurs however, among the dead.  There is no perfect consensus among the dead. There is only experience and interpretation, just as it is with the living.  Experience of a far stranger and wilder sort though, make no mistake.  The dead have questions too.  It is this that so frightened me as a child.  This suspicion that all those I encountered beyond the veil would have their biases and blind-spots and questions, even among the brightest.  This suspicion proved to be accurate as I matured into adulthood.  Now I see a kind of savage beauty in it. Awe, at the intrinsic strangeness of cognition.  We live, and we try to understand.  This doesn't change, ever.  We change.  We grow, and deepen.  But the mystery that cradles our cognition is genius beyond all comprehension, wedded to us and all that we come upon in the realm.  I have heard what I thought were angels once, speaking on this very thing.  It humbled me, to my bones.  It sank me to my knees.  But it was just a whispering, a relaxed and holy moment among friends.  At least, that's what it felt like to me.
Now, in this shadowed city called Londinium – this city I call my home – I walk the corners. I give my offerings.  I rhyme with the night, as I have done all my life.  Sometimes, when walking, I touch my throat as if the feather is there, as if I am that dark brother at Gibeon.  It comforts me somehow.  It evokes in me the sweetest possibility of promise, of a light beyond all imagining.  I carry that imagined promise with me still.


Hymn of Iskatherion from Raj Sisodia on Vimeo.
Posted by Raj at 15:29