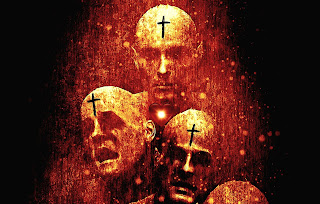 Shut the fuck up and listen to me, deviant things.  I have slain wraith upon wraith, for over a thousand years, and most of you believe that ghosts can't die.  Oh, how naive you are.  Everything can die.  Even spirit itself.  What do you know, really?
You know nothing.
The king is a murderer, in dreams.  I could kill the moon and the sun and all the stars, were I so inclined.  But the poet in me finds annihilation such a self-defeating premise.  Cephas, and the eternal glittering of a shining, blinded eye.  No, I would rather it were a mercy, a kindness.  A sight restored.  Najaret, and other dreams.  Kashi would rather romance and affection be threaded between all worlds.  I would see each heart among the Myriad ablaze with light, if the final keys of Empyrean were granted to me.  But father keeps them, at mother's hidden behest.  Wiser that he does, for I am furious, irritable, dangerous.  Like my blood.
Thrice-fold.  All through the night.
You see, father is very frightening and mother is completely insane.  My children are feral. They eat the dead.  And you are all dead, callous ones.  Liars, betrayers, abusers.  A moveable feast.  I am still the king of an ashen hill.  A heart of bleeding thorns.  It is better this way, I suppose, for all of us.  Until the sky is returned.  My rage is never sated, yet my heart is far too soft.  Part of the design, I imagine.  Best to err on the side of caution when dealing with a deranged and furious thing.  Wolf-blood and wildest laughter and poets that won't stop.  Anything can happen.  Eternity, my friends.  You just never know.