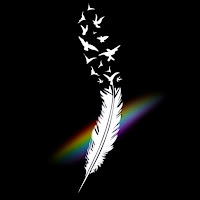 Long ago a poet once witnessed a vision of angels in a tree.  Or so the stories say.  Over the centuries the tale of this sight became London legend.  The Rye ablaze with morning light, as if the host of heaven had momentarily peeled back this sepulchre of blackened earth. The stories say that Blake was only a boy on that day.  A child witnessing something radiant, resplendent.  Blue and gold and shimmer, like a thousand kingfishers in preparation of flight.  A symphony of wings.  Sun-dappled leaves.  I often like to be close to this tale of William’s vision, so one recent afternoon I found my way again to the mural on the green. Through Tintagel's crescent and beyond the gated way.  A path I’ve walked many times.  The mural is faded now; defaced and partially repainted, but it soothes me still.  I am little enamoured with the politics of Man, but I’m captivated by his visions.  His myriad ways of seeing.  Indeed, we cannot see without the echo and context of another's eyes.  Ours alone are blind.  We see nothing without the poetry, principle and markers of those who came before us. Those who walk beside us.  The mural looks upon a playground.  This tree of painted angels watches over the children.  Their raucous laughter.  Their centred, unyielding delight.  I'm comforted by this.  I realise that sports are still seen on the darkening green despite the melancholy of time.  Nearby two boys kick a ball back and forth, attempting to outmanoeuvre each other. Occasionally the ball thuds against the mural.  The angels watch in wry silence.  One of the friends presses his back to Blake's vision, probably uncertain of its provenance, as he calls his friend to strike.  For a moment he has become an unwitting traveller.  A boy in 1765 beneath a tree of seraphim.  I notice the boy's shirt is emblazoned with an X, and I smile.  Traveller indeed.  I silently bid them well and leave the mural.  Now I go searching for another special marker.  An unassuming young oak, without adornment or commemorative plaque, planted over a decade ago by local artists in league with the Blake Society.  For a brief time on that day members of the local community gathered.  Romantics, poets and poetry-lovers who were equally touched by this tale of visions and wings. William's verses were recited.  Earth was put in place around the sapling.  And then the onlookers dispersed and were gone.  This new tree became simply another addition to the greenery of the Rye.  But a blessed, magical thing never quite loses its glamour.  I know this because when I approached the young oak its leaves were ablaze with stunning gold.  Somehow it was the only tree in the area that had caught the last of the afternoon light.  The sun was dancing in its branches like divine fire.  It took me a moment to fully recognise what I was seeing.  The sight left me breathless.  I gazed at this shimmering vision for nearly a minute before the light began to dim as the sun lost its vantage.  All too quickly the vision faded, the angels gone.  The young oak was now just a little tree beneath an overcast sky.  But as I said, a magical thing never truly loses its power.  I thanked the heavens for letting me see what I saw and placed two silver coins at the tree's base as a token of my thanks.  As I knelt there I decided to take a leaf that had fallen from the oak.  As if loosed from an angel's wing.  I knew what I needed to do, what the signs were urging me to do.  To pledge a silent, courageous kindness.  Something beyond time or distance.  So, a little later, as dusk was gathering, I eventually found my way to Bunhill Fields.  Standing before Blake's grave.  Twilight had already settled on the cemetery.  The gates would soon be closing.  In my thoughts I told William that I'd brought him something in honour of the inspiration his work has granted me.  The mad prophet slept and didn't stir but I placed the oak leaf atop his headstone, weighted with a bronze coin to stop it catching flight like the feather we both imagined it to be.